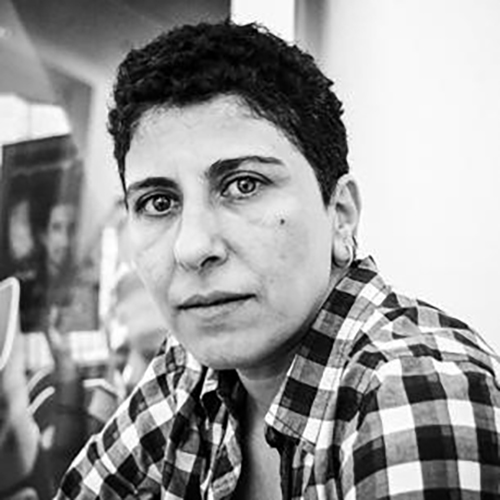 Ahlam Shibli was born in Palestine in 1970. She is internationally known as a photographer but also uses film and video art as a form of expression.

Ahlam Shibli’s film works explore majority-minority relations in Israel/Palestine and the asymmetrical relations that operate, proposing to analyse identity or identities through their interactions. Her film Nine Days exposes the underlying web that operates in the discussion between young Palestinians and Israelis about power.

Shibli’s work uses a documentary aesthetic to address the tensions embedded in the notion of home, dealing with and struggling against its loss, but also the restrictions and limitations that the idea of home imposes on individuals and communities marked by repressive identity politics. Occupation (2016-17) is based on the destruction of Palestinian livelihoods in Hebron and the occupied territories by the Israeli colonial regime and the actions of Zionist settlers. Ramallah Archive (2014) points to ways of reorganising collective and individual existence through the photographic negatives and documents found in the Ramallah Municipal Archive while Death (2011-2012) shows the efforts of Palestinian society to preserve the presence of martyrs who lost their lives fighting against the Israeli occupation. Ahlam Shibli has also dealt with issues linked to the LGBTI+ community in her work Eastern LGBT (2004-2006).