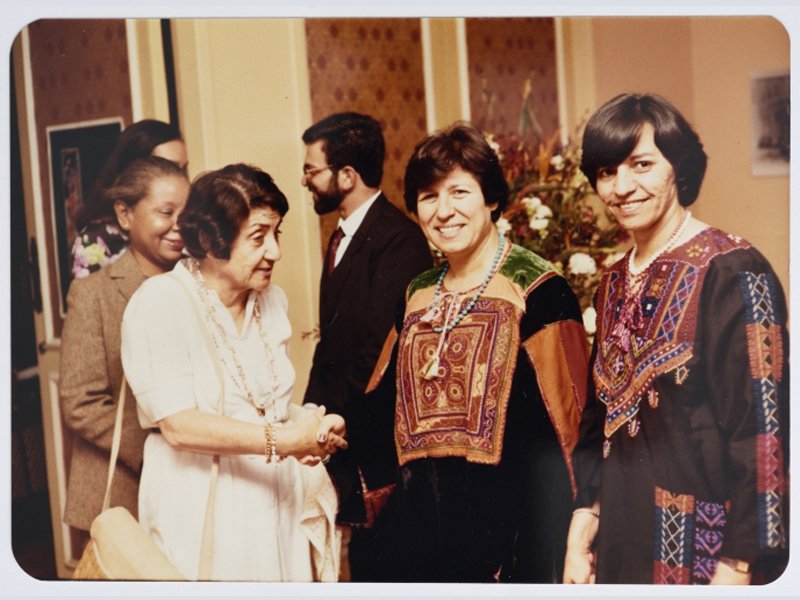 “Through photographs and cinema, we can transmit and spread the values of the revolution to the public and keep them alive”

Khadijeh Habashneh returned to Jordan in 1967 after finishing her studies in Cairo and joined forces with Mustafa Abu Ali, Sulafah Jad Allah and Hani Jawhariya to found a group of Palestinian and Arab filmmakers who decided to support Palestinian resistance by shooting films about the struggles of the Palestinian people and daily life in the refugee camps. Forced to flee Amman (Jordan) after Black September in 1971, they created the organisation Palestinian Film Unit in Beirut, Lebanon in 1973, under the tutelage of the PLO. In 1976, this group would become the Palestinian Film Institute, which was directed by Khadijeh Habashneh until 1982. Together, they worked to make a “popular cinema” by creating a new form of cinematography, using both fiction and documentary. At that time, they established strong links with the international sphere of anti-colonial cinema, from Latin America to Europe, collaborating with groups such as Dziga Vertov and filmmakers such as Jean Luc Godard and Pino Solanas. This group produced more than 30 films, many of which have now disappeared, and they were screened throughout the world even though they had not been shown in Palestine until recently.

With her documentary Children Without Childhood, Khadijeh Habashneh rose to the level of Sulafah Jad Allah, the other top female Palestinian director. This documentary shows the daily life of orphaned children born to the martyrs of Tel al-Zaatar in 1976. She then made Women in Palestine, a documentary that vanished with the Israeli invasion of Beirut in 1982, of which no copy is preserved.

Khadijeh Habashneh lives in Ammán and is working on writing a book entitled Knights of Cine, which traces the history of the first group of Palestinian filmmakers, the Palestinian Film Unit.

—They do not Exist, UbuWeb.