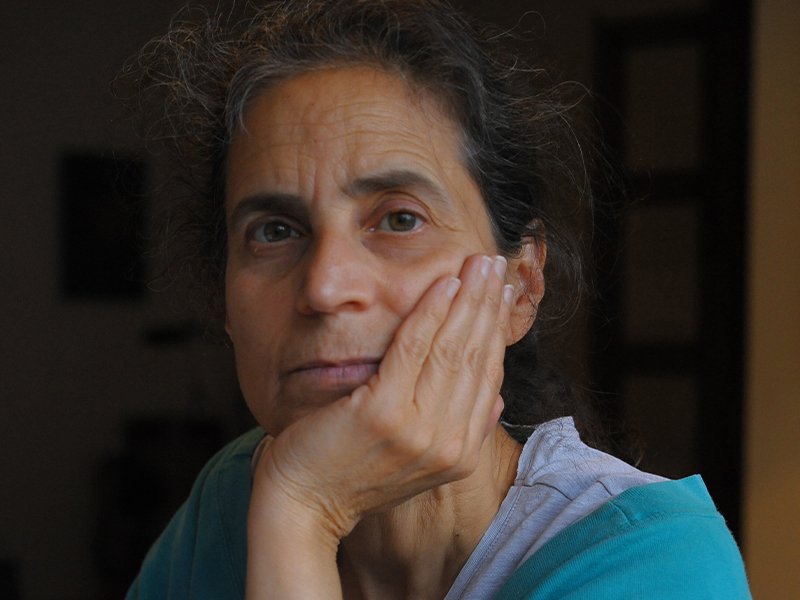 Samira Badran (1954) is a visual artist of Palestinian origin born in Libya. Her father Jamal Badran, an artist and expert in Islamic art, played an essential role in her artistic training and introduced her to the world of art. He was her first teacher and taught her the basics of drawing and painting and guided and encouraged her to study at the Academy of Fine Arts in Cairo. Samira Badran continued her studies in painting and engraving at the Accademia Delle Belle Arti in Florence.

Samira Badran’s work focuses primarily on her personal perceptions of the Palestinian context under Israeli colonial occupation. She explores concepts of collective memory, confinement, immobility, impediments and fragmentation of territory and the body. She works in a variety of media and techniques, including ink drawings, watercolour, acrylic and oil painting, collage, photography, intervention on analogue photographs, installation, printmaking and recently short film animation. Trained mainly in the visual arts, sculpture, painting, urban installations and performance, her work has been exhibited in museums internationally, at the WhiteBox art centre in New York, the Al-Hoash gallery in Jerusalem, the Havana Biennial, the Musée du Luxembourg in Paris and the Gemeetemuseum in The Hague.

Memory of the Land, her first short film, won in 2018 the prize for best experimental film at the Nazra Palestine Film Festival in Venice and in 2020 the jury prize at the Al-Ard Film Festival in Sardinia. This animated short film reflects on the human condition under the duress of different forms of violence, with collective memory and identity serving as a form of resilience.

Samira Bardan works as a drawing teacher at the University of Ramallah and lives in Martorelles, Catalonia.

—THE INTERVIEW : Samira Badran: “Culture is a tool for resistance and resilience”.

—Badran: “the Palestinian population is subjected to a colonialist military regime that violates human rights on a daily basis”.